It felt like in our first 7 days in China we have been travelling at the speed of light. After returning from national parks we spent few days in Changsha, trying not to spend too much money (damn China is expensive!!!) and ‘socialising’ at local TV presenter birthday party Jamie got us invited to. It was quite a random night, as back home I would never imagine rocking up to a strangers party, especially birthday one, but here no one really minds. As long as you are a foreign firend of a friend who has a friend who knows the host’s friend your presence will be welcomed and recorded on countless photographs and videos taken sneakily from neighbouring tables. Surprisingly for such a VIP party with a live music, speeches and plenty of food, the celebrations ended just before 10pm. But I suppose an early night was in our favour. The following day our alarms went off at 5am and few hours later we took off to Xi’an, a ancient city most famous for nearby Terracotta Warriors.

The city of Xi’an is surrounded by the world’s largest city wall 14km long, which itself is one of the biggest attractions in the area. Renting a bike or walking around for at least few kilometres is a must, although the price being charged for two hours ride is ridiculous. $7 per bike plus another $7 for entering the wall can break a backpackers bank but we did it anyway and it was quite a fun ride.

The city of Xi’an 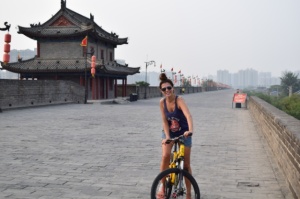 Night market in the Muslim district 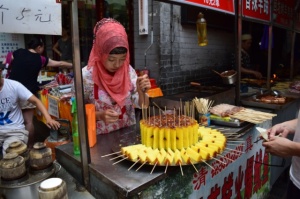 Rice cake on a stick

But of course our main reason for coming to Xi’an was visiting the Army of Terracotta Warriors and Horses, a sight I did not have a chance to see on my last trip to China. ‘Discovered’ by three village men in 1974 this on-going excavation site with almost 8000 terracotta warriors, horses and weapons, became world’s heritage in 1987. The life size statues of warriors show off Chinas greatest military organisation and are believed to represent the exact number of the imperial guards around 200 BC! Not a bad way of showing off your military power!

Grounds of the Terracotta Army 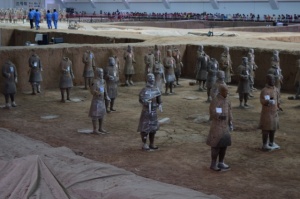 And there is many more to be discovered

Unfortunately the grounds where the three pits of Terracotta Army are located don’t tell you much about the history of this discovery. There is an on site museum…about the museum (!) but it turned out to be a collection of enlarged photos of Bill Clinton and similar persons visiting the site and for some reason did not take our fancy so we gave it a miss!

It’s a shame we missed going to Qin Shi Huangs’ s  mausoleum, localed few kilometers away from Terracotta Army, as apparently the museum has great collection of artifacts and funeral objects related to the death of first unifier of Chinese empire.

Statue of an armed warrior

Unesco sites are spread all over China so if you are done with one and want more, you will most likely find either historical or nature themed heritage site around you. From Xi’an we were considering heading to Beijing, but because of expensive flights and not much time we had left in this part of China, we decided to stay in the area, which translates to going some 200km away from our original location. We jumped on a fast train to Luoyang were we spent a night and on the following day we headed for Longmen Grottos.

Located just outside Louyang, Longmen Grottos are limestone rocks carved with thousands of figures representing Chinese Buddhism. Buddha statues, lotus flowers, ancient prescriptions, singers and dancers that appear on the walls and in the niches are dated back to 493 AC. 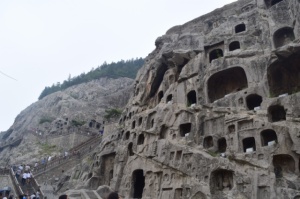 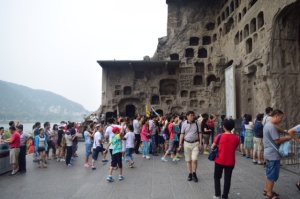 Unfortunately on this site there was no way of escaping tourists

Onced covered with paint and gold the statues and paintings have weathered with time and been affected by growing tourism. Many are ‘caged’ away so that people resits temptation of touching them. 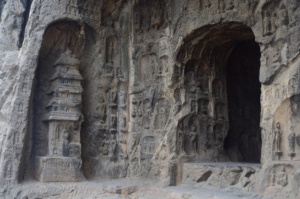 Statue carved in the wall 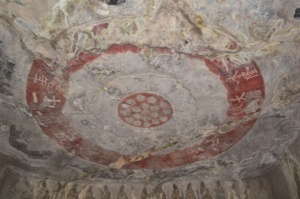 Ceiling inside one of the caves

With no doubt the most spectacular is the 17 meter high statue of Vairocana Buddha, dated 676 AD. The statue is surrounded by numerous other figures like heavenly kings,temple guards and flying divas. It makes you feel so humble when you stand next to it all!

The biggest cave and the greatest carvings 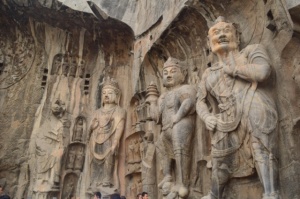 Another stop on our list was a town of Dengfeng and nearby Shaolin Temple, home to Zen Buddhism and Chinese marshal arts. There are over 30 Kung Fu schools in the area with the main one located on the grounds of the temple of course. We started our visit to the temple early in the morning being one of the first tourist on site! Woohoo!

Early start to the day means peace and quite

The Shaoiln temple was built in 495 AC and its surrounded by smaller temples and pagoda forest, all set in the mountains. From the early historical records it is known that Shaoiln became a home to its first preacher, an Indian monk called Batuo. And Batuo’s exeptional marshal art skills were most likely to start off Shaolins connection with Kung Fu, now world famous.

After wandering around the temple we watched a 30 minutes show presented by students of Shaoiln’s Kung Fu school. For some reason I imagined it being set in the open air area with monks flying above our heads. Instead we got seated down in enclosed theatre, and the main show took maybe 15 minutes with the rest of the time left for 3 Chinese tourists being invited onto the stage trying to copy Kung Fu moves. Not really what I expected, however what was presented before the cheesy part did leave me speechless and the most impressive part involved a pin going through a glass panel straight into a balloon on the other side of the glass. If I was to concentrate that much surley my brain would have exploded before the balloon… 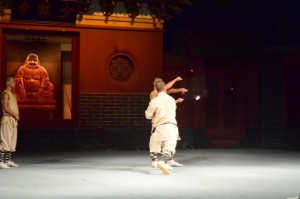 Pin, glass and a balloon

Wanting to see more of the real stuff we purchased tickets for Shaolin Zen Music Ritual advertised as “the world’s most difficult and highest fighting spectacles”(?). As I said before I have envisioned flying monks and I apparently during this great show the monks were not only to fly but they would “tumble” at a height of 80 meters!

The location of this open air theater was beautiful with the main stage located at the bottom of the Songshan mountain. As it got cold and it srarted drizzling I rented an old soviet looking coat. Not sure if I looked the part, but the photo below still makes me giggle!

Cigarette was made out of the entry ticket 🙂 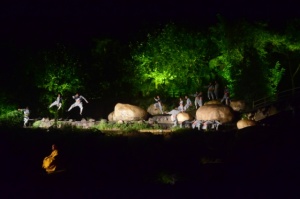 Were these the monks flying at 80m high? I’m not so sure!

The world’s biggest man made moon!!!

What I’ve been up to and where…

Go out and see the world

This WordPress.com site is the cat’s pajamas

Curiosity-driven travels of a solo wanderer