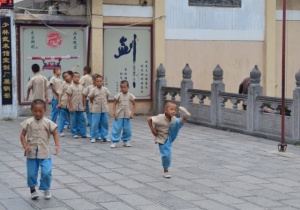 It felt like in our first 7 days in China we have been travelling at the speed of light. After returning from national parks we spent few days in Changsha, trying not to spend too much money (damn China is expensive!!!) and ‘socialising’ at local TV presenter birthday party Jamie got us invited to. It was quite a random night, as back home I would never imagine rocking up to a strangers party, especially birthday one, but here no one really minds. As long as you are a foreign firend of a friend who has a friend who knows the host’s friend your presence will be welcomed and recorded on countless photographs and videos taken sneakily from neighbouring tables. Surprisingly for such a VIP party with a live music, speeches and plenty of food, the celebrations ended just before 10pm. But I suppose an early night was in our favour. The following day our alarms went off at 5am and few hours later we took off to Xi’an, a ancient city most famous for nearby Terracotta Warriors. END_OF_DOCUMENT_TOKEN_TO_BE_REPLACED 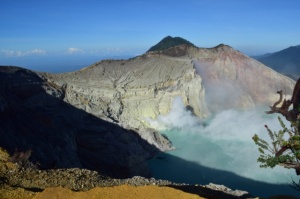 Beauty and the beast

It’s no secret that the best thing about traveling without any deadlines (apart from expiring visas!) is flexibility. We didn’t plan on visiting Java but the sudden decision of skipping south Sumatra gave us some extra time to play with. On the way to Borobudur we chatted to a Dutch girl who was just ending her backpacking trip. She said that one thing she regretted not doing in Indonesia was climbing Volcano Ijen. The name instantly rung the bell and reminded us of a program we watched on BBC in the UK few years back about sulphur mining in an active volcano in Java. I did a little bit more Googling which came up few other reasons for tackling Ijen: blue flames visible only at night and magnificent sunrise. The decision was made. Ijen was our next stop and we were going to climb it with our favourite backpacking kiddo, Kristina! END_OF_DOCUMENT_TOKEN_TO_BE_REPLACED

When I started planning our trip, seeing Orangutans in the wild was on the top of the list. The question I had was where exactly should we head to see the apes? I started doing some research and as google search engine usually comes up with most popular sites first, the Orangutan Rehabilitation Centre in Bukit Lawang popped up on my screen immediately. There were lots of close up photos of orangutans, big and angry male apes, mothers with babies, apes being fed bananas and even photos of people trying to escape from a not so nice cuddle from a one upset orangutan. What I saw on the screen had nothing to do with wildness I wanted to experience and even though I have to admit holding a hand with an Orangutan was one of my dreams it didn’t feel right. After exploring this further I came across few rather negative comments about Bukit Lawang. It was said that “This former orangutan rehabilitation centre in North Sumatra attracts lots of camera-happy tourists to take easy snapshots of tamed orangutans being fed in a forested setting on the fringes of Gunung Leuser National Park.”

Bukit Lawang was a no no. END_OF_DOCUMENT_TOKEN_TO_BE_REPLACED

A group photo with Mr Omer!

Berastagi’s main attractions are two volcanos that surround the city: mount Sibayak and mount Sinabung. People arrive, climb the volcano and depart, leaving the area undiscovered. It’s a shame because there is so much more to this region, including a very peaceful Buddhist temple Taman Lumbini, surrounded by lush green gardens. Typical us, we decided to hang around for a little bit longer to make the most of our time in Berastagi, but admittedly all the fun we had, been 100% thanks to the local kids we met throughout our stay. END_OF_DOCUMENT_TOKEN_TO_BE_REPLACED

It’s hard to believe that we have been travelling for over 5 months. The dream we were once dreaming became the reality we are now living and although not every day on the road is perfect,  I do feel blessed being given this amazing opportunity to travel. Today I’m going to celebrate our journey by sharing with you the numbers and the best moments from the last 5 months. So here we go! END_OF_DOCUMENT_TOKEN_TO_BE_REPLACED

Last few days we spent in Temerloh was fun. It was a rather random choice for a stopover, but all we wanted was a town that was cheap with no tourist attractions and no hustle. Temerloh is only 1.5 hours away from KL and we decided to make it our base, hoping to catch up on our blogs and do a bit more planning before we depart for Indonesia. Little did we know, being the only tourists in town became a local attraction in its own right. END_OF_DOCUMENT_TOKEN_TO_BE_REPLACED

What I’ve been up to and where…

Go out and see the world

This WordPress.com site is the cat’s pajamas

Curiosity-driven travels of a solo wanderer